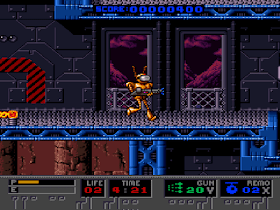 Genre: Action
Perspective: Side view
Visual: 2D scrolling
Gameplay: Platform, Shooter
Setting: Sci-fi / futuristic
Published by: Electronic Arts
Developed by: Gray Matter Inc.
Released: 1993
Platforms: Super Nintendo (SNES), SEGA Genesis / Mega Drive
An interesting game about the adventures of an alien, very similar to an ant, who got a lot of trouble on his head after he destroyed his father's spaceship on a distant asteroid. As a weapon, he uses his blaster, to which you can pick up a different arsenal. The hero does not hesitate to use his fist. In addition to the described skills, there are other interesting devices here. In general, the game is of very good quality with very pleasant moments, it will suit many for a pleasant pastime. Music and graphics are also made at a decent level. Game for 1 player.
‹
›
Home
View web version