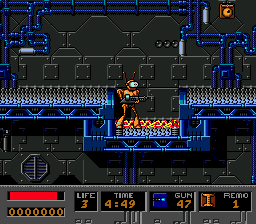 Genre: Action
Perspective: Side view
Visual: 2D scrolling
Gameplay: Platform, Shooter
Setting: Sci-Fi / Futuristic
Published by: Electronic Arts
Developed by: Gray Matter Inc.
Released: 1993
Platforms: SEGA Genesis / Mega Drive, Super Nintendo (SNES)
Funny game in the platformer genre, about the space ant robot. Who, having received the assignment from his father, promised to bring him what he asked, and, of course, give him the car in safety and security. But it was not there. A couple of asteroids, our character crashes into a meteorite and falls on unfriendly lands that swarm with enemies. So the main goal is to get out and carry out the father's assignment along the way.
In the game, we have to pass about 45 different levels and even fly on a space ship.
In the game there are different types of weapons. But if they all end, we'll have to use a metal fist, which our ant always has with him. The game has a lot of humor, so the game tunes in a positive way.
The game is also known as BOB.
In Japan, the game came out as Space Funky B.O.B.