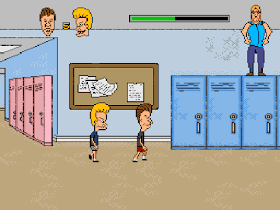 Genre: Action
Perspective: Side view
Visual: 2D scrolling
Gameplay: Arcade, Beat 'em up / brawler
Published by: Viacom New Media
Developed by: Realtime Associates
Released: 1994
Platforms: Super Nintendo (SNES), SEGA Genesis / Mega Drive
A hardcore platformer with puzzle elements based on the famous animated series about two narrow-minded people whose meaning of life is toilet humor and the absence of any traditional values.
The player will have to move between levels-locations to help two dunces get to a rock concert, having previously done a lot of operations, the common goal of which is to get a couple of tickets. To achieve the task, the guys (and the player along with them) will go through fire and ice, sewers and schools, yards and shops, looking for, it would seem at first glance, the most ridiculous items that could help them get one step closer to their goal. . The game has a lot of puzzles, traps and enemies trying to interfere with the main characters.
‹
›
Home
View web version