Beauty and the Beast (SNES) 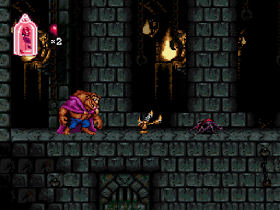 Genre: Action
Perspective: Side view
Visual: 2D scrolling
Gameplay: Platform
Interface: Direct control
Setting: Fantasy
Published by: Hudson Soft USA
Developed by: Probe Software Ltd.
Released: 1994
Platforms: Super Nintendo (SNES), SEGA Genesis / Mega Drive
A beautiful and young girl named Belle is forced to live against her will in a strange castle inhabited by talking enchanted furniture and a terrible monster living there. If you already watched this cartoon as a child, then you already know the entire plot part without me. The game is based on the work of the same name from the Disney studio, which created a wonderful animated film based on the classic fairy tale "Beauty and the Beast". Hudson also made a very decent game. In any case, the game looks better than Beauty and the Beast - Belle's Quest or Beauty and the Beast - Roar of the Beast, implemented on the Sega Genesis. In this version, you will find great graphics, good sound effects, good animation, decent level design and a story that, in general, is not far from the cartoon. First of all, this project is recommended to fans of Disney and this fairy tale, and only then to everyone else.
‹
›
Home
View web version