Beauty and the Beast (SEGA) 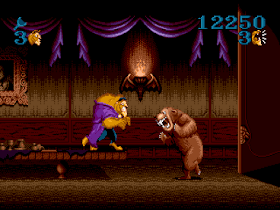 Genre: Action
Perspective: Side view
Visual: 2D scrolling
Gameplay: Platform
Setting: Fantasy
Published by: Sun Corporation of America
Developed by: Software Creations Ltd.
Released: 1993
Platforms: SEGA Genesis / Mega Drive, Super Nintendo (SNES)
Based on a Disney cartoon. The monster under your control must save the magical rose from other people's encroachments. He fights with his clawed paws and a powerful voice that can paralyze everyone around. The game is drawn well, with a decent soundtrack, but it cannot be called a masterpiece because of the not very dynamic action. Single player game.
‹
›
Home
View web version