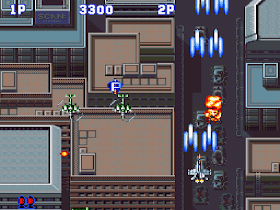 Genre: Action
Perspective: Top-down
Visual: 2D scrolling
Gameplay: Arcade, Shooter
Vehicular: Flight / aviation
Published by: McO'RIVER Inc.
Developed by: Video System Co.
Released: 1994
Platforms: Super Nintendo (SNES), Arcade Machine
Aero Fighters - A very good vertical flying shooter, reminiscent of Area 88. The game was so popular that it was awarded sequels on other systems, and a special game for the Nintendo 64. What makes it special? In this version, you have as many as 8 characters in your arsenal - 4 for the first player and 4 for the second. Each hero has his own aircraft and weapons, each with his own fire support, each represents his country. Battles are fought in different parts of our planet, judging by the last level with an alien life form. Most of all I liked to visit Russia and admire the secret alterations into the hidden secret weapons of our Kremlin. The main highlight of Aero Fighters, I think, can be called the endings of the main characters. Each character has its own ending, there are only 8 endings. But that's not all - the endings also depend on the duet passage. For example, you need to choose heroes from the same countries: Japan, which means that the second player must be from Japan, etc. and at the end you get an ending for two characters. And if you drag out the fight with the last boss, you can see the destruction of our planet. And there are 13 endings in total!
‹
›
Home
View web version