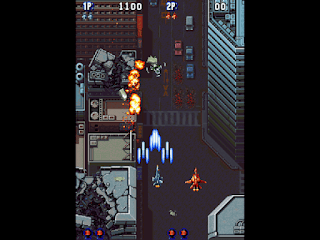 Genre: Action
Perspective: Top-down
Visual: 2D scrolling
Gameplay: Arcade, Shooter
Vehicular: Flight / aviation
Published by: Tecmo
Developed by: Video System Co.
Released: 1992
Platforms: Arcade Machine, Super Nintendo (SNES)
At the start, the player chooses one of four nationalities (USA, Japan, England, or Sweden), and then flies through seven enemy territories, destroying and shooting large numbers of enemies, and then, at the end of each level, face the corresponding boss.
Player one can only play with a limited number of planes (those that correspond solely and exclusively to control 1). These aircraft are the F / A-18, the FS-X, the AV-8B, and the AJ-37. If a second player joins the game, he will be able to choose the planes that can only be selected for the second command, but with the nationality previously chosen by player one. These aircraft are the F-14, the F-15, the JAS-39, and the Tornado IDS. It should be noted that the nationality restriction was removed in Aero Fighters 2.