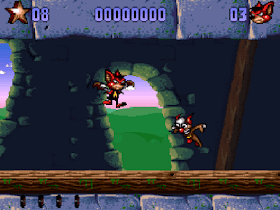 Genre: Action
Perspective: Side view
Visual: 2D scrolling
Gameplay: Arcade, Platform
Published by: Sun Corporation of America
Developed by: Iguana Entertainment Incorporated
Released: 1994
Platforms: Super Nintendo (SNES), SEGA Genesis / Mega Drive
The second part of the story about the bat Aero. The hero returned to complete the fight against the villain Edgar Ektor, who survived the fall in the first part. In fact, the same platformer with an acrobatic flyer in the title role remained. Noticeable dramatic improvements in the graphics and dynamics of what is happening on the screen. Plus new tricks, levels, bonuses, minus a timer and a list of required tasks for mandatory completion. Excellent musical accompaniment. On the way to achieving his goal, our hero will meet both new and old friends and enemies.
‹
›
Home
View web version