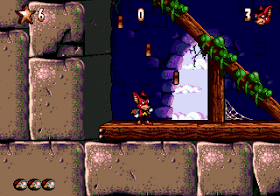 Genre: Action
Perspective: Side view
Visual: 2D scrolling
Gameplay: Arcade, Platform
Published by: Sun Corporation of America
Developed by: Iguana Entertainment
Released: 1994
Platforms: SEGA Genesis / Mega Drive, Super Nintendo (SNES)
The pernicious industrialist Edgar Hector did not perish, as implied in the finale of Aero the Acro-Bat. Zero, a flying squirrel at the last moment saved him, so, Aero again is not all right. But the freedom-loving bat disappeared from the circus in search of new adventures. And now what? Now he is forced to find and stop Ector, while he did not use his "Plan B".Unfair game developers, releasing a sequel to a successful game, do not think for a long time. The levels are redrawn, maybe the music is rewritten and ready. The so-called "game engine" simply does not change. The lucky owners of the Aero the Acro-Bat 2 cartridge were much more fortunate. The developers did not radically rewrite the game. Before us is the good old Aero, so that who played in the first part, without any problems adapting to the second. But all the wishes were taken into account and all the roughnesses revealed earlier were cleaned.
The game has become less difficult, the management is now more than obedient, Aero has learned new movements, and the worlds and ways of interacting with them have changed so much that there is not enough and a few pages to write about everything. I will say briefly - the capacity of the cartridge in comparison with the first game has doubled, so that more jokes, more dynamics, more animation, more music, even voices have appeared!Aero the Acro-Bat 2 is ideally "sharpened" for 16 cues. What for Sega Mega Drive, that for the Super Nintendo game looks, and sounds almost the same, there are no such sharp differences as in the case of the first part. True, some levels on Szego look much poorer - they have fewer layers, in places everything is so flat ... Probably, it happened because the game came out half a year earlier than the competitor and did not have time to realize everything in it? Nevertheless, the superiority of Segov's processor is felt, the Nintend's version of the screen is reduced both on the sides and below! The clown mask, by the way, in the SNES implementation does not have hair and facial expressions is different.In 2003, it was planned to port the game to Game Boy Advance, but this did not happen. For the Wii virtual console, the game was released in PAL on August 6, 2010 and for the US on September 20.Reviews about the game the warmest, and what can I say, it really is gorgeous, a masterpiece from the 90's!

To select the level in the menu "options" listen in series (not necessarily listen to music until the end of) music 8, 4, 19, 71. The screen should blink. Come out of the options and startgame. Click on pause and hold down both + A + C. You will see the level select screen.
Invulnerability: On the title screen, enter a combination: Left + Left + A + B + C + Left + Up + Down + A + right + A. If everything is correct - you hear a beep.