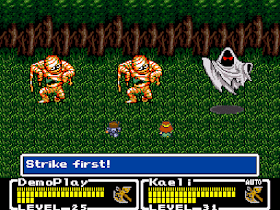 Genre: Role-playing (RPG)
Perspective: 3rd-person, Top-down
Pacing: Turn-based
Gameplay: Japanese-style RPG (JRPG)
Setting: Fantasy
Published by: Square Soft
Developed by: Square Co.
Released: 1992
Platforms: Super Nintendo (SNES), Game Boy, Game Boy Advance (GBA)
The producers referred to it as "a simplified role-playing game designed for novice players." This game is somewhat similar to the Final Fantasy we are used to, but it is more adapted for Western players. Facilitates the gameplay world map, which allows you to move freely from location to location. The game contains many puzzles and tasks.
The Central Tower has protected the land for hundreds of years. That is, until the day when four monsters broke into the Central Tower and captured the crystals of Fire, Earth, Water, and Air. Using them, they began to devastate the earth.
And here comes Benjamin, a young guy who gets more adventures than he ever dreamed of...
‹
›
Home
View web version