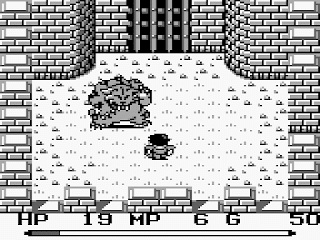 Genre: Role-Playing (RPG)
Perspective: Bird's-eye view
Art: Anime / manga
Gameplay: Action RPG
Setting: Fantasy
Published by: Square Soft
Developed by: Square Co.
Released: 1991
Platforms: Game Boy, Game Boy Advance (GBA), Super Nintendo (SNES)
Origin of the Mana series (Seiken Densetsu). Remember masterpieces like Secret of Mana (SNES) and Legend of Mana (PSX)? It was conceived as an offshoot of the Final Fantasy with elements of adventure, but halfway it spin off into an independent series. Known in Europe as Mystic Quest. Remake on the GBA as Sword of Mana.

Final Fantasy Adventure's story is pretty straightforward, although more than decent by Game Boy standards. A long time ago, a bad man named Vandole subdued the power of the Mana tree, which gives life to all creatures on the planet. But his reign of terror did not last long. The gallant knights of Gemma challenged him (by the way, the early name of the game was Gemma Knights). One of which, with the help of Mana's magic sword, put an end to the reign of the evil emperor.
Much water has flowed under the bridge since then, and people have actually forgotten this sad history lesson. Individuals have reappeared, eager to subdue the power of Mana. But, naturally, in any era there are heroes who will not allow this glaring injustice. One of these you have to play.

We travel the world from city to city, from dungeon to dungeon, along the way we destroy monsters, gain a level and stock up on items and equipment. Everything here is standard for Action RPG games. However, it is worth noting the signature moments of Final Fantasy Adventure, which will subsequently be used more than once in the games of the series. One of them is the power bar, which determines the power of your punch. With each swing of the weapon, it is reset to zero and immediately accumulates. The larger this bar, the stronger your blow. In addition, if you fill it to the end, you can perform a special attack, which is different for each type of weapon: sword, ax, chain, etc. By the way, the arsenal serves not only to eradicate monsters, with its help you will often have to work way. For example, you can cut down trees with an ax, and use a chain to climb over abysses.
The second point, which was also widely used in subsequent games in the Mana series, is the teammates. Throughout the journey, different companions will join you every now and then. They help to fight (although their AI leaves much to be desired), and in addition, in the menu, they can be given the ASK command, thereby asking them to perform a hurry (from treatment to the store).
The dungeons themselves are not too confusing, especially since you are given a visual and understandable map. Although sometimes you have to solve a couple of fairly simple riddles with buttons and levers, as well as find hidden passages in the walls. Boss battles are not difficult. Basically, if you come to them moderately pumped and having several healers (or healing spells), then there will be no special difficulties.
Final Fantasy Adventure has a few shortcomings, which are better called roughs. Firstly, these are “auto dialogues”. That is, if you accidentally walk up to an NPC without any intention of talking, he will still slowly and persistently tell you valuable information, even if you've already read it ten times. Moreover, often non-playable characters do this, blocking the passages, so that they cannot be bypassed, not bypassed - the only way out is to move off the screen. The second point is that the dungeons are teeming with a wild number of monsters that are absolutely insensitive to your weapons, they can only be beaten with magic. This, to put it mildly, is annoying, exactly like the frequent digging in the inventory, when you need to change the key to a spell and vice versa.
However, despite these shortcomings, the game turned out to be more than decent. No wonder it is considered the best ARPG for the Game Boy. Which is not far from the truth, especially since Final Fantasy Adventure became the progenitor of the long and glorious series Mana aka Seiken Densetsu.

I think that either hardcore retro-maniacs or fans of the Mana series will still play the game. And for those and others, the visual range of the game is unlikely to be a significant barrier.
However, the graphics in Final Fantasy Adventure are very good and detailed by the standards of the Game Boy. Perhaps this was achieved due to the fact that there is no scrolling of the screen. But this does not really interfere with orientation in space.

Good. Kenji Ito has created several truly classic compositions that will later appear more than once in the games of the Mana series. The main theme of the game, which sounds on the title screen, is especially great. Unfortunately, in the dungeons, the hand involuntarily reaches for the volume control in order to save your ears from suffering. After all, the squeaky and gurgling sounds of the Game Boy are a rather specific thing. However, no one has canceled the good old way - to include music in parallel and play along with it.
‹
›
Home
View web version