Shove It! The Warehouse Game (SEGA) 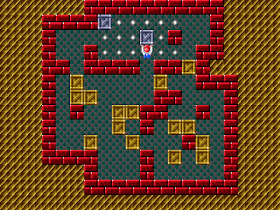 Genre: Puzzle
Perspective: Top-down
Interface: Direct control
Published by: DreamWorks
Developed by: NCS Corporation
Released: 1990
Platforms: SEGA Genesis / Mega Drive, DOS, SEGA Master System
What can I say, this is a loader, also called Sokoban. Who does not know, I will say that this is a logic game in which you need to use non-standard thinking to put objects in their places. In this case, these are various cargoes, mainly boxes. You will feel like a loader who works without a logistician. You will have to arrange the goods in the warehouse, as the owner wants it. In the Japanese version of the game, there is an intro, from which it becomes clear that the guy works in the warehouse for the sake of money and is trying to earn enough money to please the girl.
‹
›
Home
View web version