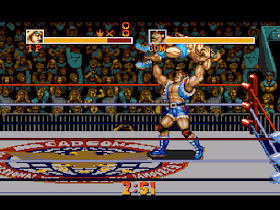 Genre: Action, Sports
Perspective: Diagonal-down
Visual: 2D scrolling
Gameplay: Fighting
Sport: Wrestling
Published by: Capcom U.S.A.
Developed by: Capcom Co.
Released: 1994
Platforms: SEGA Genesis / Mega Drive, Arcade Machine
This is a fighting game similar to Wrestling. Your main task in the game is to win the championship belt and defend it in subsequent battles. The game features ten fighters from various countries of the world. There are not so many moves in the game, they are mainly divided into grab, attack and jump. Each character has two special attacks, excluding grapples, and a finisher.
There are several game modes, including for two players. You can make minor tweaks to the game.
In Japan, the game was released as Muscle Bomber: The Body Explosion.
‹
›
Home
View web version