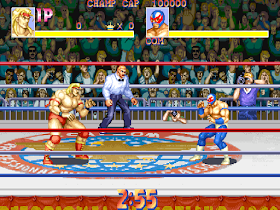 Genre: Action, Sports
Perspective: Bird's-eye view
Visual: 2D scrolling
Gameplay: Fighting
Sport: Wrestling
Published by: Capcom Co.
Developed by: Capcom Co.
Released: 1993
Platforms: Arcade Machine, SEGA Genesis / Mega Drive
This game belongs to the wrestling genre, which means that you will have a great show with the participation of huge guys who beat each other to the delight of the public. At your choice, there are 8 fighters of various weight categories, from technical to clumsy, but able to put on the shoulder blades with one blow. You can play either alone or in a tag match with your friend or COM. As for the gameplay, the output of each wrestler is accompanied, as it should, by a spectacular exit, and after the match is over it will not be superfluous to show off. The techniques were performed as follows: a variety of captures, kicks, arms, hold, creases of the limbs, i.e. then all that real wrestling is famous for. All tricks were successfully placed on 2 buttons, so there should not be any difficulties with the control. Fans of this sport should like this project.
‹
›
Home
View web version