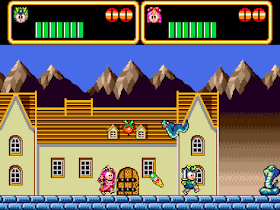 Genre: Action
Perspective: Side view
Visual: 2D scrolling
Gameplay: Arcade, Platform, Shooter
Published by: SEGA Enterprises Ltd.
Developed by: Westone Co.
Released: 1990
Platform: SEGA Genesis / Mega Drive
Walker-flying shooter from the Wonder Boy series. It has two modes. On the first one, we go forward and shoot everything that is on the way. The hero's energy gradually decreases, which must be replenished at the expense of fruits scattered on the level. On the second, we fly through the air, shoot enemies, and then fight the boss. Here is a game for 1-2 players.
‹
›
Home
View web version