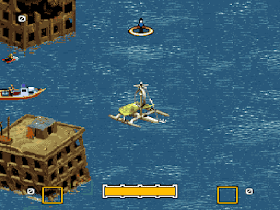 Genre: Action
Perspective: Side view, Top-down
Visual: 2D scrolling
Gameplay: Arcade, Platform, Shooter
Vehicular: Naval / watercraft
Setting: Post-apocalyptic
Published by: Ocean Software Ltd.
Developed by: Ocean Software Ltd.
Released: 1995
Platforms: Super Nintendo (SNES), SEGA Genesis / Mega Drive, DOS
Another Super Nintendo game based on the film of the same name, this time Water World is presented to us. Unlike the other version on the Sega Genesis, this one looks much better in terms of graphics and sound. Recommended to all fans of this film and its main actor Kevin Costner. As a result of global warming, the glaciers have melted, and almost all land has submerged under water. Only a few floating cities remain, the inhabitants of which have never seen the land. The only and absolute value in the vast oceanic expanses is the soil suitable for growing food. The hero of Kevin Costner, who makes a living searching for land, learns that the legend of the existence of some mysterious land is quite real. But the map showing the way to the cherished goal turns out to be the object of the claims of the most merciless pack of sea pirates, who are nicknamed Smokers because they move by motorized modes of transport and for the constant smoking of cigarettes. The game takes place in three modes. First, you control your boat and fight off numerous insidious bandits or protect defenseless citizens of various floating cities. The second game mode is diving your hero into the water, where you have to collect various valuable things that are so necessary to pay for the repair and additional weapons of your trimaran. In this mode, you have to dodge any predatory fish and, most importantly, surface in time. The third mode is the liberation of floating cities from all sorts of merciless bandits who managed to penetrate there. Here you stab the first pirate who came across, if possible, take away his weapon from him or find him among the walking crowd of thugs, and start shooting. With the help of canisters with clean drinking water, replenish your health. The game has simply bewitching music, and the graphics do not contain flaws. Quite a worthy implementation of the cult film of the 90s.
‹
›
Home
View web version