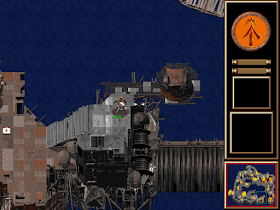 Genre: Role-playing (RPG), Strategy
Perspective: Top-down
Pacing: Real-time
Setting: Post-apocalyptic, Sci-fi / futuristic
Published by: Interplay Productions
Developed by: Intelligent Games Ltd
Released: 1997
Platforms: DOS, SEGA Genesis / Mega Drive, Super Nintendo (SNES)
As practice shows, games based on films are very often, to put it mildly, not very good. I don't know why it happens this way, but that's the way it is. I personally tend to the version that developers in the hope of "cutting the dough" make games in a fairly short time, which is why the project usually comes out unfinished, and many interesting ideas are simply discarded at the design stage. In this case, two years passed between the release of the movie and the game. Which already hints that the developers were in no hurry to release Waterworld. Whether this was good for the game or not, now we will try to find out.
The first thing that catches your eye when you start Waterworld (if you've watched the movie) are the videos. With the help of editing, the developers combined various excerpts from the original film, and also superimposed new characters on top of the old image, that is, they made up the actors and dressed them in costumes appropriate to the entourage of the film, which set out the goals between missions. Needless to say, it turned out very, very well. They, of course, will not see an Oscar for these roles, but they have worked their money honestly. This approach to creating briefings and telling the story personally left a very positive impression on me.
The plot itself is not replete with any intricacies - it's just a little story about the inhabitants of a floating city. Actually, no main characters from the film appear here. The events seem to take place in parallel with the original plot of the film. So to speak, they will show what is left behind the scenes. In principle, from the game "based on" I did not expect anything else.
The gameplay in Waterworld is quite simple. You have at your disposal a small detachment of local residents who resist the "smokers" using various weapons such as crossbows, knives or homemade firearms. The missions are not very diverse - basically you need to either kill everyone, or protect some object from enemies ... and then also kill them all. Sometimes - for a change - we are given to blow up something of value. After completing the mission, the fighters who have shot the most "smokers" gain experience. However, there are no clear explanations in the game, and it is not possible to understand what this experience affects.
The developers did not deprive the attention of the economic component of Waterworld. You can buy different weapons and armor between missions through "bartering", similar to what we saw in the movie. You can exchange the necessary things for junk, fresh water or the most valuable commodity - land. You can find these things in the course of the quest or you can exchange an unnecessary item to get them. Accordingly, the more valuable the product, the more trash, water or land you can get for it. I also liked this aspect, as the developers seem to do everything to ensure that the game fully matches the atmosphere of the film.
Graphically, Waterworld looks great. The game is not that rich in scenery, and there is not much variety here. All game locations are variations on the "floating city" theme. It is always a circular heap of metal, with barrels, nets and other heaps of rubbish scattered everywhere. You may be asking, "So what's so great about it?" And the fact that it looks exactly as it was shown in the film, and therefore does not cause any complaints. Made simply but tastefully.
Management is nothing out of the ordinary. Click on the terrain - and the fighters run in the right direction. Click on the enemy - and your wards will instantly riddle him with whatever comes to hand. You can also easily divide the squad into several groups, using the standard for strategy games "selection" with the mouse of a part of the squad or a lone warrior.
What I really liked and remembered was the portraits of your wards ... I have not seen such terrible faces for a long time! Not in the sense that they are badly drawn. They are drawn very well and of high quality. In the sense that they directly show how hard it is for them to live. Gloomy, dirty, with broken teeth, with scars ... real fighters of the post-apocalyptic future. Again, I can't help but praise the developers for this: here, too, they didn't lose face before the film!
What is the result? In general, despite the simplicity, the game largely leaves a positive impression, or at least does not cause negative ones. That for the "play on the film" is actually half the battle.
I also want to note that at one time the feature movie "Waterworld" did not receive worthy ratings and critical acclaim, and Dennis Hopper even managed to receive the Golden Raspberry Award for playing the role of "Deacon". But, despite the bad reviews, the picture still fell in love with many viewers and eventually received the well-deserved status of a "cult film". Unfortunately, the Waterworld game cannot respond in kind. In my opinion, this is a great addition to the film. Qualitatively recreated surroundings, simple but good gameplay, beautiful graphics, wonderful videos and a good script for the game "based on". If you like the movie "Waterworld", I strongly recommend that you check out this game.
‹
›
Home
View web version