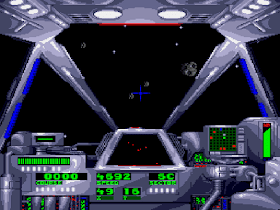 Genre: Action
Perspective: 1st-person
Gameplay: Shooter
Vehicular: Space flight
Setting: Sci-fi / futuristic
Published by: Accolade
Developed by: Accolade
Released: 1993
Platform: SEGA Genesis / Mega Drive
This is a space flight simulator. You are the pilot of a space fighter and must complete various tasks assigned to you. It can be clearing a minefield, destroying the enemy, helping some base. In general, everything that needs to be done in space. In order to travel faster in space, you can use a special function that will take you to a place faster than the speed of light. Also, the ship has its own system of damage, and depending on what is damaged, it will go worse or cause less damage.
‹
›
Home
View web version