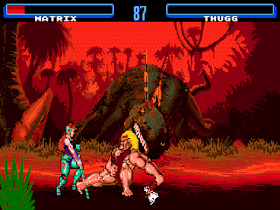 Genre: Action
Perspective: Side view
Visual: 2D scrolling
Gameplay: Fighting
Published by: Black Pearl Software
Developed by: Incredible Technologies
Released: 1996
Platform: SEGA Genesis / Mega Drive
Life and death, eternal enemies fought for dominance over everything outside of time. But death had its own cunning plan. She gathered all the warriors who had ever defeated her and forced them to fight against each other. She promised the winner eternal life. There are only eight fighters in the game, each of them belongs to a particular time era. Now they need to fight in a mortal battle just like in Mortal Kombat. The winner has to conquer death itself. The outcome of the battle depends only on you. Each of the arenas corresponds to its character. There are many violent moments in the game, such as decapitation, blood, the severed head of a dinosaur, and the corpses of knights in the background of the game.

Cool guy with a chainsaw. In my opinion, the most convenient character to control, with his favorite "lumberjack tool", will give odds to any enemy attack.

Fighter from the future. The weapon is a laser sword. A Jedi, on his own starship, surfs the expanses of the universe in search of rivals. Gathers a collection of the heads of the vanquished, hanging them in his cabin.

Neanderthal is a heavyweight, from the Stone Age. With his homemade hatchet, he exterminated more than a dozen tyrannosaurs.

Medieval knight. Sword, helmet, armor and someone else's life - that's all he needs. Gourmet. He indulges in raw human beings.

Evil viking with a huge axe. A very powerful warrior, able to knock out a weapon from his hands (along with his hands) with one blow.

Samurai with two katanas. I am ready to make hara-kiri not only for myself, but also for you!

Mantis is a killer. It was bred to order for gladiator fights by the Genetic Research Center. But as a result of the mutagenic preparations tested on it, he became uncontrollable, shredded his enclosure, chopped up all the base personnel and was like that.

A girl with a buzzing vibrosword. It is assumed that in early childhood, when she was returning from karate classes, she was quite successfully run over by a train, from which she lost an arm and two legs. But medicine did not stand still, and soon the charming Miss Matrix showed off cybernetic steel limbs.
‹
›
Home
View web version