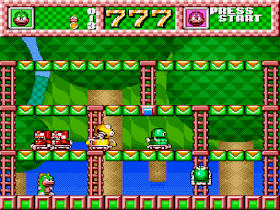 Genre: Action
Perspective: Side view
Visual: Fixed / flip-screen
Gameplay: Arcade, Platform
Published by: Kaneko Co.
Developed by: Kaneko Co.
Released: 1992
Platform: SEGA Genesis / Mega Drive
A game about two dinosaurs who must free their island from the robots that have captured it. To do this, over many levels they have to climb stairs, collect various objects and smash robots with hammer blows. The gameplay of the game is reminiscent of the classic game Lode Runner. In Wani Wani World, the enemy must also first be lured into the pit, and then hit on him so that he crumbles. The game supports two-player mode, it is much more interesting and easier to play in it.
‹
›
Home
View web version