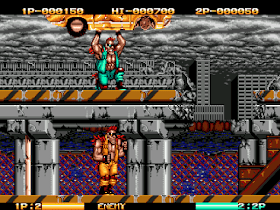 Genre: Action
Perspective: Side view
Visual: 2D scrolling
Gameplay: Beat 'em up / brawler, Platform
Setting: Cyberpunk / dark sci-fi, Post-apocalyptic, Sci-fi / futuristic
Published by: Data East USA
Developed by: Data East Corporation
Released: 1992
Platform: SEGA Genesis / Mega Drive
The events in the game take place in the near future. After the explosion of nuclear weapons combined with chemicals in New York, created by a mad scientist. Many residents of the city have turned into insane mutants ready to serve the scientist. The scientist creates an organization called "Big Valley" consisting mainly of these mutants. With the help of this organization, he takes the ruined city by force. Desperate, the US government hires two super-powered mercenaries to take back the city and punish the villain. For one of them you have to play. You will have to defeat hundreds of opponents with your fists. Also, the hero can lift things several times heavier than him. The game has a two-player mode.
‹
›
Home
View web version