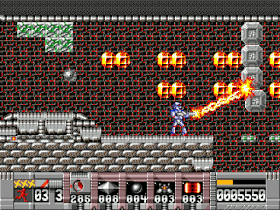 Genre: Action
Perspective: Side view
Visual: 2D scrolling
Gameplay: Platform, Shooter
Setting: Sci-fi / futuristic
Published by: Accolade, Ballistic
Developed by: Rainbow Arts Software GmbH
Released: 1991
Platform: SEGA Genesis / Mega Drive
A curious game somewhat similar to Metroid. You have a small arsenal of weapons, a laser gun and grenades. You can also turn into an asterisk (shuriken) by curling up into it like Sonic The Hedgehog. You have to go through thirteen levels, kill crowds of monsters and aliens, and at the end of each level you will fight with the leader (boss). The plot of the game is quite large and tells us about the difficult relationship of people with aliens. The lost colony of Alterra is a long-abandoned artificially created living world. Alterra is actually five colonies in one. A completely autonomous system, better known as Multiple Organism Unit Link (MORGUL). Previously, this colony was inhabited. But a devastating earthquake upset the balance, MORGUL rebelled. Those colonists who were lucky enough to escape told terrible stories about the rebellious mind.
For many years, humanity has tried to return to Alterra. Finally, thanks to genetics, they created a savior - Turrican, a mutant warrior to solve problems on a planetary scale. Meanwhile, MORGUL was creating new combat lifeforms on Alterran. Turrican's task is to destroy hostile creatures and MORGUL itself.
‹
›
Home
View web version