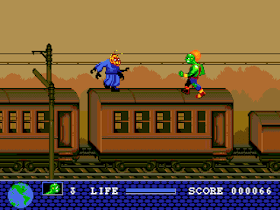 Genre: Action
Perspective: Side view
Visual: 2D scrolling
Gameplay: Beat 'em up / brawler
Setting: Sci-fi / futuristic
Published by: SEGA of America
Developed by: Infogrames Europe SA
Released: 1992
Platform: SEGA Genesis / Mega Drive
Igar based on the Toxic Avenger animated series. Like the eight-bit version, this is a Beat 'em up. Choose one of the three characters: Toxie, NoZone or Junkyard, who do not differ much from each other in terms of techniques. We go forward, fight with alien invaders, jump over the abyss when necessary. In some levels we ride a skateboard, a motorboat or fly a helicopter. The goal of the game is to get to the alien king and show him what the earth monsters are capable of! You can play for two.
‹
›
Home
View web version