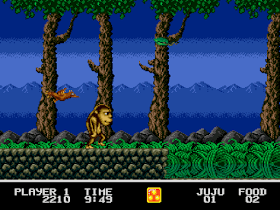 Genre: Action
Perspective: Side view
Visual: 2D scrolling
Gameplay: Arcade, Platform
Published by: SEGA of America
Developed by: Tad Corporation
Released: 1991
Platforms: SEGA Genesis / Mega Drive, Nintendo (NES)
The protagonist of the game, Toki, is an inhabitant of the Tarzanesque tribe. They are a primitive tribe living on an island in the South Seas. Everything was fine until you understand where a huge castle did not grow from and the princess of the tribe, the beautiful Miho, was kidnapped by a sorcerer. All the inhabitants of the tribe were turned into animals by him. Our hero Toki was turned into a monkey. He discovers that even though he has become an animal, he can control himself. He goes to rescue the princess and at the same time to break the spell. In addition to his animal appearance, the protagonist gained the ability to shoot from his mouth.
‹
›
Home
View web version