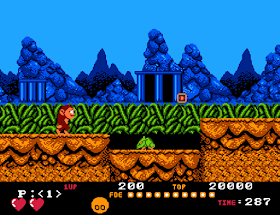 Genre: Action
Perspective: Side view
Visual: 2D scrolling
Gameplay: Platform
Interface: Direct control
Setting: Fantasy
Published by: Taito America Corporation
Developed by: Tad Corporation
Released: 1991
Platforms: Nintendo (NES), SEGA Genesis / Mega Drive
Adventurer based on the arcade hit. The adventures of a spitting monkey. Our main character is actually not a monkey at all, but an enchanted boy. The sorcerer kidnapped our boyfriend's beloved, and decided to turn him into a monkey. Well, let's make the sorcerer regret his decision! You can jump on enemies and shoot them down from a distance with spitting. At the end of each level, as expected, there is a boss. Interesting game.
‹
›
Home
View web version