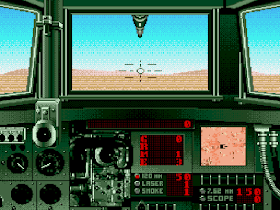 Genre: Action, Simulation
Perspective: 1st-person
Vehicular: Tank
Narrative: War
Published by: Absolute Entertainment
Developed by: Imagineering Inc.
Released: 1992
Platforms: SEGA Genesis / Mega Drive, Super Nintendo (SNES)
Simulator of the American tank M1T1 Abrams, sent to fight in the desert in the region of Iraq. Among the enemies are other tanks, helicopters and other vehicles. Our tank is armed with good weapons to turn all these vehicles into dust. The combat vehicles are very well animated, and the graphic design of the surrounding places is not very good, although it is understandable - the desert, after all. The sound and music are very good - different military melodies make you feel the real atmosphere of the war. In general, it turned out to be an excellent simulator.
‹
›
Home
View web version