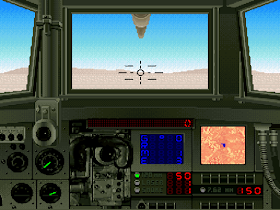 Genre: Action, Simulation
Perspective: 1st-person
Vehicular: Tank
Narrative: War
Published by: Absolute Entertainment
Developed by: Imagineering Inc.
Released: 1992
Platforms: Super Nintendo (SNES), SEGA Genesis / Mega Drive
You control a battle tank. It goes without saying that you were given a tank not to travel for mushrooms, but to carry out combat missions. Using high firepower and good maneuverability, the tank is capable of any feats. As a weapon is given a gun (which is understandable), a machine gun and a laser. Focusing on the map and varying speed, it is necessary to destroy enemy objects and leave from under the fire. Single player game.
‹
›
Home
View web version