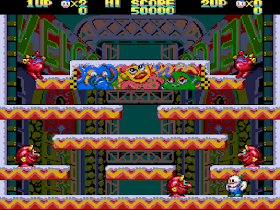 Genre: Action
Perspective: Side view
Visual: Fixed / flip-screen
Gameplay: Arcade, Platform
Published by: Tengen Ltd.
Developed by: Toaplan Co.
Released: 1993
Platforms: SEGA Genesis / Mega Drive, Nintendo (NES)
The game tells us about the fate of two snow brothers (snowmen) named Nick and Tom. They lived quietly in their snowy world with their princesses. But at some point, the princesses are kidnapped. Nick and Tom need to free them. You have to take on the role of one of the brothers. Or play both in co-op mode. On the levels you need to destroy all enemies. You can do this by turning them into a snowball and breaking them against the wall. Do not delay the passage of the round, otherwise evil will come to the rescue, various monsters and ghosts which will be invincible. You can get rid of them only by destroying the remaining enemies. The game has various bonuses in the form of elixirs. Depending on the color, they improve various properties:
Upon death, all upgrades are reset. After level 50, you will be able to play as a snow castle princess.
‹
›
Home
View web version