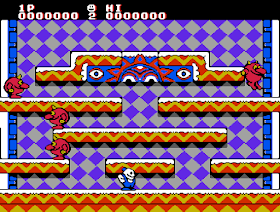 Genre: Action
Perspective: Side view
Visual: Fixed / flip-screen
Gameplay: Arcade, Platform
Published by: Capcom U.S.A.
Developed by: Toaplan Co.
Released: 1991
Platforms: Nintendo (NES), SEGA Genesis / Mega Drive
Nick and Tom are two princes living with two princesses (each in their own mansions). However, happiness comes to an end - the evil king Skoch freezes the princes, and kidnaps their girlfriends. Tom and Nick gain the ability to manipulate snow and ice. Well, now Skoch will get what he deserves! Go snow brothers!
There are about 50 levels in the game. At each level it is necessary to destroy all monsters. As a weapon, of course, you have snow, which you can throw at enemies, or stun, and then push them at other enemies. But if you leave enemies stunned by snow alone, they will melt and will attack you again.
‹
›
Home
View web version