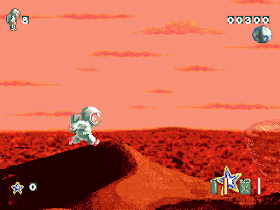 Genre: Educational, Puzzle
Perspective: 1st-person
Gameplay: Platform
Educational: Science
Vehicular: Flight / aviation
Setting: Sci-fi / futuristic
Published by: SEGA of America
Developed by: Novotrade Software Kft.
Released: 1995
Platform: SEGA Genesis / Mega Drive
Probably many watched the cartoon "The Magic School Bus"? So. Very interesting game with decent graphics. For example, in the first level you are given the opportunity to sit behind the wheel of a bus flying in space and knocking down meteorites. Then you need to land on the moon. And after that, you can roam the moon that you landed on. In general, play, you will not regret.
‹
›
Home
View web version