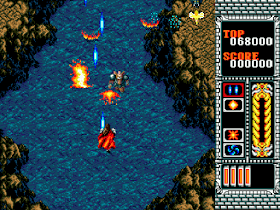 Genre: Action
Perspective: Top-down
Art: Anime / Manga
Gameplay: Shooter
Published by: Renovation Products
Developed by: Technosoft Co.
Released: 1993
Platform: SEGA Genesis / Mega Drive
In the game, you act as one sorcerer capable of emitting various magic. The plot of the game begins in the distant past in a fictional fantasy universe. Followers of an evil creature called Gyra. Once they were imprisoned in the walls of the castle. The sorcerer Aryaag betrayed the King and rescued the forces of evil Gyra. For evil to spread everywhere. The most powerful sorcerer of the Laden Kingdom was ready to destroy Aryaag. It turns out that Aryaag is his brother Roki. Laden was expelled from the captured kingdom. But Laden promised to stop Gyra's evil. The game has seven levels. Four of which you can complete in any order you like.
‹
›
Home
View web version