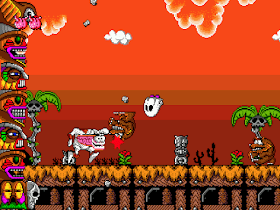 Genre: Action
Perspective: Side view
Visual: 2D scrolling
Gameplay: Platform
Narrative: Horror
Published by: SEGA of America
Developed by: Vic Tokai Corporation
Released: 1991
Platform: SEGA Genesis / Mega Drive
In this platform game, you will control Chuck D. Head, a decapitated mummy whose task is to defeat the villain Max D. Cap, a warlord from the underworld itself. The reward for this feat will be the return of a normal human form for Chuck.
The gameplay here is simple, you have to run through several colorful levels, collecting all sorts of useful upgrades along the way and defeating ugly bosses. You can destroy enemies by jumping on their heads, or you can use the face that Chuck hides in his torso and extends to the side if necessary. You can also use the skull found on the level as a weapon and which can be thrown at the adversary. Sometimes there will be magic potions that give all sorts of useful effects such as immortality or the instant destruction of all enemies on the screen.
‹
›
Home
View web version