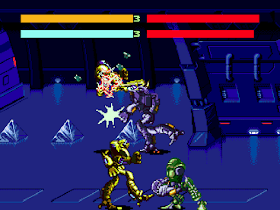 Genre: Action
Perspective: Side view
Gameplay: Beat 'em up / brawler, Fighting
Setting: Sci-fi / futuristic
Published by: SEGA of America
Developed by: Novotrade Software Kft.
Released: 1993
Platform: SEGA Genesis / Mega Drive
A semblance of the plot will tell about the spaceship of earthlings that crashed on a distant planet, which is captured by evil robots under the command of a certain mysterious creature. The whole team perishes as a result of the crash, only one member of the crew survives, and the villains are going to use his brain to create another worker in the mines of the planet. However, this was precisely the mistake of employers. The doomed poor fellow has a chance for salvation, the path to which will have to be cut through the hordes of guards.
The game is divided into five levels, which in turn are divided into stages, their action takes place both on the surface of the planet and inside its various premises. The player will have to avoid obstacles on the way and fight robots like him, usually no more than two at a time, local strong leaders are waiting for you. Fights are more tactical, especially at higher difficulty levels, as the player quickly sticks together flippers, as well as most enemies. True, some monotony of technical performance and a little unresponsive control interfere with playing.
But here a really unique feature comes to the rescue of the game - the player can literally assemble his cyborg from many different parts, such as armor and weapons. It is also not forbidden to combine their parts with each other, mastering different movements, in battle you can even tear off the armed limbs from defeated opponents and leave them for yourself. However, they can do the same to you, which means that your special attacks are similar. Bosses, in general, can divide you by zero, instantly depriving you of the entire strip of energy.
‹
›
Home
View web version