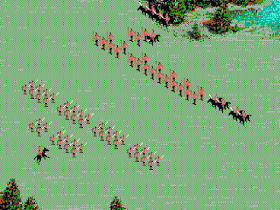 Genre: Strategy
Perspective: Diagonal-down, Side view, Top-down
Visual: Isometric
Interface: Direct control, Multiple units/characters control, Point and select
Setting: Africa, Classical antiquity, Egypt (Ancient), Europe, Historical events, Middle East
Narrative: War
Published by: Electronic Arts
Developed by: Bits of Magic
Released: 1991
Platform: SEGA Genesis / Mega Drive
An excellent strategy of the early 90s, first released on PC DOS system, a year later ported to Sega Genesis and Amiga.
In the story, you start in Ancient Rome in 275 BC. as an ordinary centurion, gradually, as the game progresses, you grow in rank, and so on up to the emperor of Rome, that is, Caesar. There are many enemies around Rome from which the empire must be defended, through diplomacy or good old steel (choose whichever is more interesting). But more often you still have to take up the sword, and for this you need an army, which, in turn, must be maintained, and there is an interesting way to replenish the treasury and these are battles in the Colosseum. Slaves dissatisfied with taxes receive circuses, and you get bread ... sonorous and brilliant of course! The game also has a fleet to transport your cohorts, there are fleet battles in which you can lose your legions. And what cool battles in this game at that time. As a result, the goal of your game is to conquer the entire world of that time, in fact, the formation of the Roman Empire.
P.S. You can also seduce Cleopatra, and thereby take Egypt without a fight.
‹
›
Home
View web version