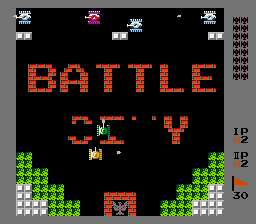 Genre: Action
Perspective: Top-down
Gameplay: Shooter
Vehicular: Tank
Published by: Namco Limited
Developed by: Namco Limited
Released: 1985
Platforms: Nintendo (NES), Arcade Machine
The concept of the game is quite simple: one (or two - in the mode for two players), your tank should kill hordes of attacking enemy tanks, while preventing the destruction of their own staff. The game is developed within a single screen (that is, without scrolling), filled with various elements of the landscape. In the lower center of the screen is always your headquarters (in the form of the emblem of an eagle), protected by a thin brick wall. If he shot the enemy will be destroyed (or, inadvertently, your) tank, the game will be lost. Also, it will be lost if you lose all your "life", appears on the right side of the screen next to the tank (below, next to the flag shows the number of the current level). Enemy tanks come in three points: the upper left corner, upper right corner, and the central point of the top of the screen.At the same time you will resist no more than four enemy tanks, but only on each level appears 20 tanks (the number of remaining states in the upper right corner). At each level, there are three sure "flashing" of the tank, getting into that gives rise to a random point in the game space of any prize. At the same time, if you have not picked up the prize until the next "blinking" of the tank, it disappears from the board. As they say, who managed - and he ate. A very important aspect of the gameplay are various obstacles and elements of the landscape, located on the playing field and turns some levels of unpretentious shooters almost in a dynamic puzzle. Well, of course, not to mention the opportunity to play together - one of the main reasons for the popularity of the game. About this regime is worth noting that a random hit in your tank shot your friend, though not destroy your car, but leave it for a few seconds motionless, it can be fraught with considerable trouble. Actually, this general description of the game can be finished and move on to the analysis of its individual elements.
You can switch the stages when "STAGE 1" appears on the screen, but the music does not sound. Switching is done with the buttons A or B.
‹
›
Home
View web version