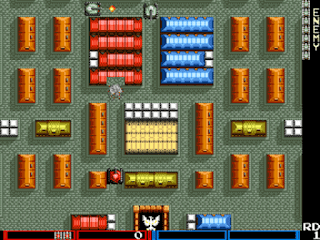 Genre: Action
Perspective: Top-down
Gameplay: Arcade, Shooter
Vehicular: Tank
Published by: Namco Limited
Developed by: Namco Limited
Released: 1991
Platforms: Arcade Machine, Nintendo (NES)
Who hasn't played Battle City on NES? Meet their improved version for the arcade machine. Unlike a series of numbered levels, here we need to free up a section of the map. The colors are bright, the enemies are nimble (a large tank is especially dangerous, requiring three hits). In addition to standard enemies, bosses will also come across. There are as many as 15 improvements, both an increase in speed and combat power, as well as slowing down enemies, shield, bombing. There are 36 levels in the game in total, so stock up on more diesel fuel.
‹
›
Home
View web version