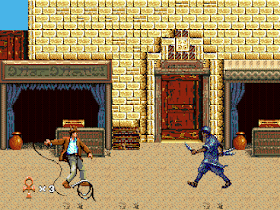 Genre: Action
Perspective: Side view
Visual: 2D scrolling
Gameplay: Puzzle elements
Published by: SEGA of America
Developed by: Waterman Design
Released: 1994
Platforms: SEGA Genesis / Mega Drive, Nintendo (NES)
This game is a Beta (Beta) version of the unfinished Sega Genesis game based on the TV series of the same name "The Young Indiana Jones Chronicles". The plot of the game is based on this television series and you will play as a young Indiana Jones. Since the game was significantly unfinished and the prototype was rather crude, it is quite difficult to judge the quality of the game. Of the charms, it can be noted that the whip was quite interestingly implemented and made with vectors. Which was later used in Young Indiana Jones: Instrument of Chaos.
‹
›
Home
View web version