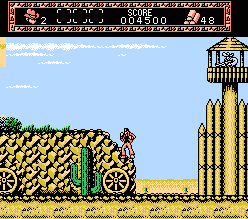 Genre: Action
Perspective: Side view
Visual: 2D scrolling
Gameplay: Platform
Setting: World War I
Published by: Jaleco USA
Developed by: Jaleco Ltd.
Released: 1992
Platforms: Nintendo (NES), SEGA Genesis / Mega Drive
Adventures of all your favorite character. The aged Indiana Jones tells about the troubles that he got into his youth, and you have to participate in these events. The action takes place during the First World War. The platform consists of three long levels. Young Indiana helps the victims of the Mexican Revolution, delivers important reports on the battlefields in France, arranges sabotage at the plant in Germany. Adventures begin each time with a whip in their hands. Later, Indie finds a different, both cold and guns, weapons, but can lose him if he misses the enemy's attack. The game is interesting and moderately complex.