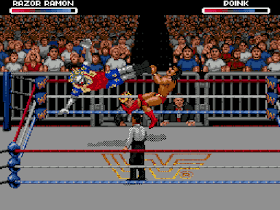 Genre: Sports
Perspective: Diagonal-down
Sport: Wrestling
Published by: Acclaim Entertainment
Developed by: Sculptured Software
Released: 1995
Platforms: SEGA Genesis / Mega Drive, SEGA 32X
And this is a real wrestling simulator, yes, the same wrestling. You can choose one of the fighters like Bret Hart and go punch your opponent in the face. You have a large number of throws and punches in stock. But the truth is one thing is bad, the graphics in this part are not very good, but this is forgivable because it is one of the first.
‹
›
Home
View web version