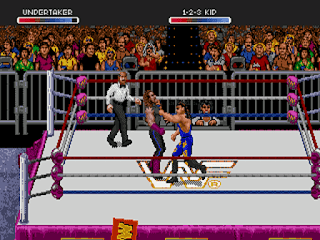 Genre: Sports
Perspective: Bird's-eye view
Sport: Wrestling
Published by: Acclaim Entertainment
Developed by: Sculptured Software
Released: 1994
Platforms: SEGA 32X, SEGA Genesis / Mega Drive
Beautiful pixel art graphics. You can choose one of twelve fighters, one of whom is a woman. Each fighter has special properties and techniques. In WWF RAW, everything is done in the best traditions of this show. You can bludgeon your opponent with anything, anywhere. In the ring and outside it, by any means at hand, including the First Aid Kit, which should heal, not cripple. The game has a large number of different game options. There is also a game mode for up to four players.
‹
›
Home
View web version