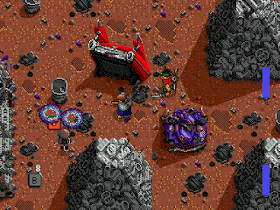 Genre: Action
Perspective: Top-down
Visual: 2D scrolling
Setting: Cyberpunk / dark sci-fi
Published by: Electronic Arts
Developed by: BlueSky Software, Zono
Released: 1993
Platform: SEGA Genesis / Mega Drive
In the game, we have to play for one or two wizards, depending on the selected game mode. They ended up in another unfriendly dimension, which, by the way, is made in technostyle. To return to their own time, they need to find Machine Man. They have a long and difficult road ahead of them.
The game has a wide variety of weapons. From melee weapons, mostly used when out of ammo, to super-powerful energy blasts that destroy everything around them. There are also various fireballs, electric discharges, mines and even a boomerang. There is a special mode for reviewing the map. In general, you will not be bored.

A - a powerful blow with a stick;
B - shot with the current magic weapon;
Start - enter the menu.
Menu items are activated by any button. They can also be called during the game. To do this, hold down the first indicated button, and then press the second.
C, direction - choice of spell;
C, A - teleportation;
C, B - levitation;
A, Start - start the eagle;
A, C - invulnerability;
A, B - cure.
‹
›
Home
View web version