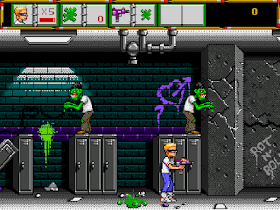 Genre: Action
Perspective: Side view
Visual: 2D scrolling
Gameplay: Platform
Developed by: Electronic Arts
Released: 1991
Platform: SEGA Genesis / Mega Drive
This is a prototype of the game, in principle it can also be called a Beta version. The game tells us the story of one brave boy who must clear the school and surrounding areas from zombies, which turned into his friends and school teachers. You need to collect various items and pass through simple obstacles. Unfortunately, the game was never officially released.
‹
›
Home
View web version