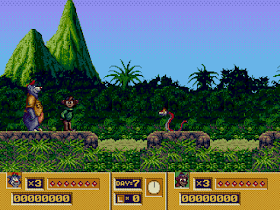 Genre: Action
Perspective: Side view
Visual: 2D scrolling
Gameplay: Platform, Shooter
Vehicular: Flight / aviation
Published by: SEGA of America
Developed by: SEGA Interactive Development Division
Released: 992
Platforms: SEGA Genesis / Mega Drive, Nintendo (NES)
The game is based on the Disney animated series TaleSpin. Two bears, Baloo and Kit, work for Rebecca at her shipping company. From the newspaper, Rebecca learns about the competition held by the mayor. The main prize in the competition is a profitable contract. She decides that Baloo and Kit will take part in the competition directly. But Shere Khan, the evil tiger oligarch, is also taking part in the contest, and his methods to win are not entirely pure. The city announces that two companies Higher for Higher and Shere Khan Industries have been selected to participate in the competition. To defeat Shere Khan hires air pirates led by Don Karnage to deal with competitors. Baloo and Kit have seven days to collect ten shipments in eight countries.
The game can be played as one or two in a joint mode. The weapons of Baloo and Kit are different. To complete the level, you need to collect at least ten boxes to open the passage. There are also levels where you have to fight on a plane with air pirates. The game has various bonuses that improve or give some kind of opportunity to the characters of the game.
‹
›
Home
View web version