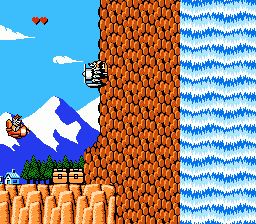 Genre: Action
Perspective: Side view
Perspective: 2D scrolling
Gameplay: Arcade, Shooter
Vehicular: Flight / Aviation
Published by: Capcom U.S.A.
Developed by: Capcom Co.
Released: 1991
Platforms: Nintendo (NES), SEGA Genesis / Mega Drive
The plot of the game is very simple: You play for Baloo - bear-airmail. You just take on the execution of instructions (roughly speaking, fly from point A to point B), but what awaits you on the road?
We'll have to face air pirates. Whether they hunt for parcels, or simply attack because of bloodthirstiness - it remains unclear, but they will not miss you at the helm. Each of them has its own methods of non-destructive destruction, the main thing is to find them before your lives end.
A little bit about the gameplay. The aircraft shoots in three different directions (straight, diagonals), and it can be deployed at any time. In places where you fly in a horizontal plane, the plane flies in the opposite direction, which sharply distinguishes the game from its neighbors in the genre. When flying horizontally and on screens with bosses, the plane simply unfolds for the convenience of shooting. There are a lot of bonuses on the levels. Hearts replenish health items, fruits give bonus points, and bags and boxes give some money to your piggy bank. By the way about money: after passing through the level you get to the store where you can purchase improvements for your aircraft.
In general, TaleSpin is quite a quality game, with nice graphics, good sounds and music.
The game was on NES, Game Boy, Sega Genesis, Game Gear, TurboGrafx-16