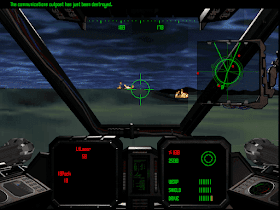 Genre: Action
Perspective: 1st-person
Gameplay: Shooter
Vehicular: Mecha / giant robot
Setting: Sci-fi / futuristic
Published by: Interplay Productions
Developed by: BioWare Corporation
Released: 1996
Platform: DOS
Formally, a mecha-simulator, but in terms of dynamics, it’s more of a first-person action, which at one time was lost “in the shadows” of MechWarrior 2 and its add-ons, but, in my opinion, does not deserve to be forgotten, if only because with MechWarrior not much in common.
In the distant future, as it should be, everything is very bad: after the atomic war, the Earth lies in ruins, and the power over humanity has been seized by an all-powerful mega-corporation. What is unusual is that humanity, despite the past war, is very, very numerous, so it was decided to explore and populate the solar system first, and then the outer space, since technology already allowed. Only here is the trouble - some planets of this Far Space are inhabited by intelligent beings (not very pleasant in appearance), who are not delighted with the presence of migrant people. The colonies on the inhabited planets are still weak and small in number and cannot inflict any rebuff to the enemy (although it would be more correct to say “enemy”: after all, people attacked first) cannot. And then your time comes.
Yes, in this game you play the role of not a noble "fighter against the regime" at all, but a cold and prudent mercenary, whom the corporation hired to protect the colonies and "ethnic cleansing" of the planets from the indigenous population (this is a distant cyberpunk future, so there is nothing to be surprised - you have to namely to exterminate the natives of the planets). Of course, you will go on a long journey not on "friends", but on "enemy" - as a fur pilot.
The gameplay, as already mentioned, is much closer to action from the first person than to a "real" fur simulator like the same MechWarrior. Yes, before the mission, we can choose the type of chassis and weapons for our robot (as well as many additional things), but the control is quite standard for action and coincides with it in terms of dynamics. From us, in general, is not required more than just "shoot and kill."
It's a completely different matter how it's done. The graphics in the game for 1996 are simply incomparable, I especially liked the purple sunsets of distant planets. This game is one of the brightest representatives of the so-called. "graphics revolution", which actually happened just at the time of the release of the game, when games suddenly blossomed with stunning colors and acquired the concept of "full 3D". I would like to note the high intelligence of opponents, and high-quality sound, and absolutely amazing music, but in this game, graphics are still the main component of a huge atmospheric sum of effects (however, another important component is the consistently increasing complexity of missions).
The game is recommended both for fans of action games and mecha-simulators, as well as, of course, for all lovers of the forgotten, but wonderful.
‹
›
Home
View web version