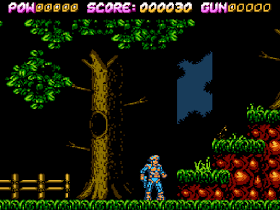 Genre: Action
Perspective: Side view
Gameplay: Platform, Shooter
Interface: Direct control
Setting: Sci-fi / futuristic
Published by: Piko Interactive LLC
Developed by: Piko Interactive LLC
Released: 2021
Platforms: Nintendo (NES), SEGA Genesis / Mega Drive
Special Agent Jim Power: An alien with supernatural powers, Vaprak, threatens to destroy our world, and our planet is the last obstacle on his way to an interdimensional vortex. This vortex leads to the fifth, still lost, dimension. If he manages to defeat us, he will destroy our world by opening a portal, because the fifth dimension has a strange mutating effect on all organic life forms. The enemy troops are too strong to fight in front, so we send you behind enemy lines. You need to slip past his omnidirectional scanners and make an attempt on the greatest evil that man has ever known. This task will require the use of absolutely all your skills and abilities. Get to the alien's fortress and send him back to the sulfur deposits where he came from.
‹
›
Home
View web version