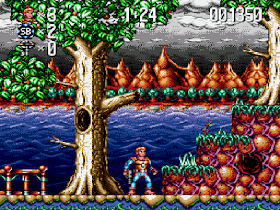 Genre: Side view, Top-down
Gameplay: Platform, Shooter
Interface: Direct control
Setting: Sci-fi / futuristic
Published by: Piko Interactive LLC
Developed by: Loriciel SA
Released: 2021
Platforms: SEGA Genesis / Mega Drive, Nintendo (NES)
The game features several contrasting game modes, including side-view, top-down, and horizontal shooter platformers. It continues Jim Power in Mutant Planet as a different title, but at the same time reinterpreting the original game by taking several of its basic elements and levels. The soundtrack was composed by Chris Hülsbeck (who composed the soundtrack for the Turrican saga).
Jim Power: The Lost Dimension in 3D is often considered by video game fans to be one of the most difficult video games ever made. Despite its name, it is an entirely 2D game, although the game uses several Parallax scrolling background layers that move in the opposite direction to give a great sense of depth. Along with the 3D glasses that came packaged with the game, designed around the Pulfrich effect, they provided a unique "3D" experience for a time when 3D polygonal graphics were rudimentary and too expensive to implement. The 3D feel was also related to the top-down stages, displaying rotational effects in the same way they were displayed in similar games like Contra III: The Alien Wars.
A version of this game was also being developed for the SEGA Genesis / Mega Drive console under the name Jim Power: The Arcade Game. However, despite being almost complete, it was never released and remained unreleased until a ROM image was finally leaked. This unreleased version features all levels and cannot be finished, despite the fact that only one music track (once again composed by Chris Hülsbeck) is present in the entire game. Jim Power: The Arcade Game is mostly the same game as Jim Power: The Lost Dimension in 3D, albeit with some minor graphical differences due to technical aspects. All aerial view stages were also replaced with additional levels, thus the renamed title of this version describing a remote arcade experience rather than a "3D" one.
‹
›
Home
View web version