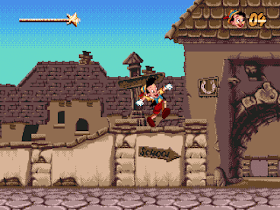 Genre: Action
Perspective: Side view
Visual: 2D scrolling
Gameplay: Platform
Published by: THQ Inc.
Developed by: Virgin Studios London
Released: 1995
Platforms: SEGA Genesis / Mega Drive, SEGA 32X
The game is based on the cartoon Pinocchio from Walt Disney. Like most games made on Disney cartoons, this is a good game, high-quality gameplay, nice graphics and sound, a simple plot exactly like a cartoon. The main goal of Pinocchio is to become a real boy. The game is worth playing. I don't think you will regret it.
‹
›
Home
View web version