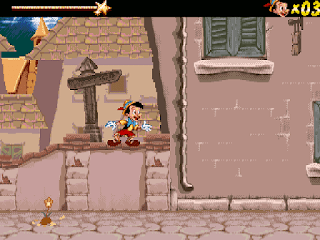 Genre: Action
Perspective: Side view
Visual: 2D scrolling
Gameplay: Platform
Published by: THQ Inc.
Developed by: Virgin Studios London
Released: 1995
Platform: SEGA 32X
The prototype is actually a complete game, playable from start to finish. Graphically, the 32x version looks noticeably better than the SEGA Genesis / Mega Drive version, but differs from the SNES (including sound).
The plot of the game is based on a 1940 cartoon from the Walt Disney studio. The game tells about the adventures of a boy made of wood by the master Geppetto. The game is very short, but filled with a variety of levels, from the usual platforming to: dancing in the QTE, riding minecart, swimming underwater and boss battles. The plot is retold in the form of a book, which is scrolled through each level.
The end credits indicate the programmers of the versions, among them you can find the responsible for the version for 32x.
‹
›
Home
View web version