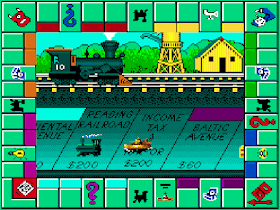 Genre: Strategy
Perspective: Top-down
Gameplay: Board game
Published by: Parker Brothers
Developed by: Sculptured Software
Released: 1992
Platforms: SEGA Genesis / Mega Drive, SEGA Master System, PlayStation (PSX, PS1), DOS
This is probably the most popular board game that was released in electronic form. Up to 8 players can take part in a real commercial race! I wonder who will be the first to declare a complete monopoly and crush the rest of the players?
The Sega Genesis version is not much different from the versions on other consoles, which means that the graphics and sound are limited, but the gameplay does not suffer from this in any way.
‹
›
Home
View web version